Sitting On The Dock Of The Bay... 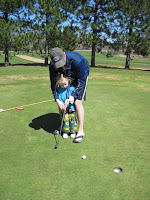 Our little family went golfing on Sunday. An interesting choice for a family activity since I can't golf and Lola is too short. But we had fun anyway.

The upside to not being good at golf is that there is room for improvement. Lots of room. I turned out to be a surprisingly good putter. The rest, not so much. Lola divided her time between holding the flag and exploring the golf cart.

The decuple bogeys were all mine, Ryan scored a few birdies. And eagles? Out of reach for all of us. 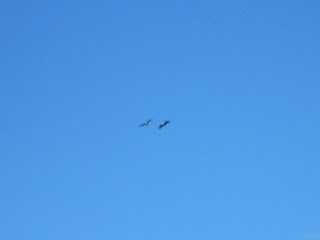 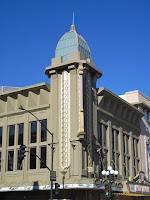 Last week I went on my first official business trip for the casino. It took me to San Diego for five days, to the National Indian Gaming Association (NIGA) Trade Show and Convention. I had a wonderful time. It was just the right combination of work and play. I was there with our General Manager, her Executive Assistant, the HR Director, and the Cage Manager. We stayed at the luxurious Omni Hotel, right across the way from the Convention Center, bordering the historic Gas Lamp District and with a view of the harbor and the San Diego Padres stadium. 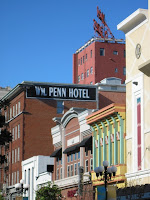 I picked up a few pointers on Casino Marketing in general and the use of Social Media in particular, and had a chance to get to know my co-workers better over a cocktail or two. Of course, the lovely San Diego weather and the abundance of restaurants and bars with an outside patio helped tremendously in that respect. Not to mention the San Diego Harbor cruise we took on Wednesday afternoon, compliments of a company that offers all inclusive cruises for high rollers.

I almost didn't make it, though. We flew out of Green Bay's Austin Straubel International Airport. Quite the mouthful but in reality a small airport with friendly people. Fortunately for me. You see, my husband had surprised me the day before my departure with a new bag for toiletries, the roll-up kind ideal for travel. Not only did he surprise me with the bag, he had also filled it with assorted travel size necessities, including a brand new camera! 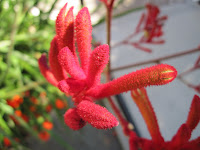 Now I know all about the rule stating anything liquid cannot exceed three ounces and must be presented in a clear plastic bag. Nothing in my bag was over three ounces, I had made sure of that, and the inside of my bag was made of clear plastic. I assumed taking my toiletries bag out of my carry-on and opening it up would be enough. It wasn't. I had forgotten one thing: the clear plastic bag cannot be larger than one quart and mine definitely was. I was bringing on far too many containers with liquids. 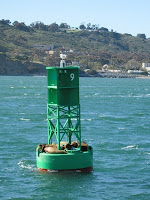 While the TSA officials were debating what, if anything, they were going to make me toss, I walked through the metal detector and set it off because I had forgotten to take off my belt. After a second, silent run, I was cordially invited to step aside for a manual pat down. As I was standing there with my arms stretched out, palms facing up, another TSA official held up my purse, asking to whom it belonged. She had to scan it again. "Sure," I replied, "no problem." The second scan still did not satisfy her and she informed me a search of my purse was necessary. Did I have anything sharp in there? "No," I answered her in earnest. Only to see her walk off moments later with my brand new pruning sheers in her hand. Oops... 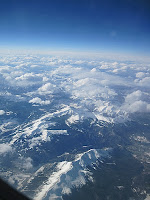 While my co-workers were laughing their heads off, I explained to the TSA what on earth I was doing with gardening tools in my purse (gardening, what else?), and I was allowed to proceed to the gate. Without my shiny pruning sheers but with all of my toiletries to compensate for my loss.

You'd think I had never traveled on an airplane before...

Email ThisBlogThis!Share to TwitterShare to FacebookShare to Pinterest
Labels: Work

When I came home from my business trip in the wee hours of this morning I tiptoed upstairs to wish my sleeping baby a Happy Birthday. Lola did not wake up when I softly whispered "I love you" in her ear. When she sleeps she is still my baby. But when she's awake, not anymore. She's three. A big girl.

This morning at 7:00 AM, I was awakened by my now three year old, proudly proclaiming "It's MY birthday." Still half asleep, I stumbled out of bed to decorate the kitchen and her chair, and do some last minute gift wrapping. And then we had cake. For breakfast!

Three years ago today I met this creature for the first time, after nurturing her in my womb for nine months. It's hard to imagine how tiny she was, how helpless. Today Lola stands three feet something tall, and grows more independent by the minute. She is definitely not a baby anymore. 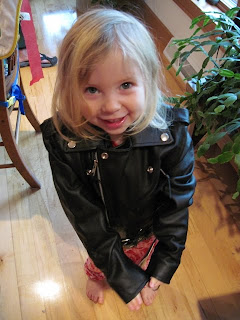 Happy Birthday, Lola! I love you. A little bit more every day. 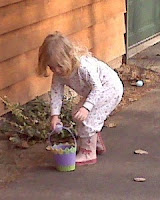 The Easter Bunny, though she insists it was Santa, brought Lola a little basket filled with treats and treasures this lovely Easter morning. Stickers, beads, play money, little wooden eggs and cows, and chocolates! After generously sharing a couple of hundred dollars and some gold coins - but not the chocolate - with her parents and the cat, she counted what was left.

"... Quatro, cinco...," I heard her softly muttering. I was impressed and amused. Thank you, Dora. I told Lola it was high time she learned how to count in Dutch and showed her how.

"Quatro, cinco," she chimed in.

My child is becoming bilingual alright, just not the language I had in mind. Though much more practical, I'm sure.

For weeks I have been looking at your flowerbeds out front, itching to get out and do some spring cleaning in there. But I restrained myself, because I know the dead leaves and other debris covering the dirt provide a protective layer against the elements and I was still waiting on that blizzard I was sure to get now that I live in northern Wisconsin. No such luck. Instead the month of March was the first March since 1871 without a single flake of snow. 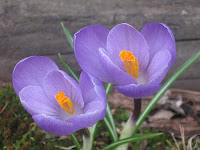 The last of the snow is gone now. The lake is free of ice. A couple of weeks ago the load limits for the roads went into effect, protecting them during the spring thaw. Due to the drought, all burning permits have been revoked until further notice. And for the third consecutive day, it was sunny out with temperatures in the mid seventies. In addition to numerous robins, I have encountered too many mosquitoes already, bumped into a bumble bee, and spotted the first butterfly. Upon inspecting your garden earlier this week, I noticed I was not the only one itching to get out. 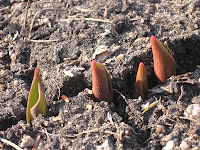 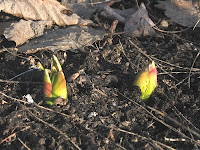 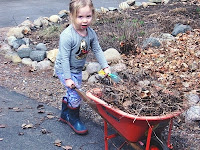 So instead of scrubbing toilets and cleaning grubby fingerprints off your windows, I put on some shorts and a tank top yesterday, grabbed my pruning sheers and a hand fork, and went to town. Miss Lola assisted in hauling off the yard waste. The both of us had a wonderful time. First we cleaned up the large flowerbed in the curve of the driveway. Next we took on the long flowerbed by the side of the house leading to the garage. Then we tackled the hosta beds out front and to the side of the house. 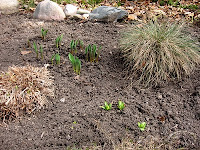 I was delighted to be gardening again. I didn't realize how much I had missed it. To dig my hands in the dirt, pull out the weeds, free the hyacinths and the tulips (or Lily of the Valleys - not sure what they are) that had grown three inches in three days. There's more to be done still. The flowerbeds in the backyard, and the fenced garden up by the road. You'll have to tell me what's in there. What are annuals that I can remove, and what are perennials that need to stay and receive some tender loving care. 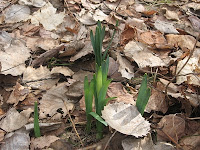 It rained last night and will continue to rain over the next couple of days. Perfect timing! And since I will be in sunny southern California for the week, I won't get wet myself. Like I said, perfect timing. To top it off, I discovered the daffodils you planted. I have not been able to find any in the stores to fill my L E N T E vases with. And now I don't have to. I'll just wait until I can cut them from the garden. Thank you.
Happy Easter! Love,