Sunday was a glorious day. Sunny, blue sky, not too warm, not too cold. My kind of outdoor sports weather. So Ryan and I gave Lola away to my cousin and the two of us went cross country skiing together. We had never done it but had always wanted to. Whitnall Park, just south of Milwaukee, rents skis and snow shoes for the afternoon. 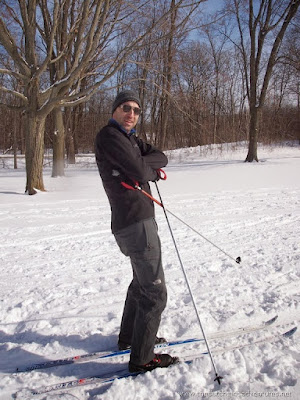 It’s not as easy as it looks. Those skinny skis are mighty slippery and the forward walking motion is a little awkward. Without proper trails –and what trails there are have been destroyed by people walking dogs, snow shoers, sleds, and butts- it’s even more difficult. I fell within seconds of taking off, and again the first time the trail went downhill. But after a while we got the hang of it and found it a most enjoyable way to spend the afternoon.

Until I fell for the third time. It was a flat surface, and I wasn’t even moving. But somehow I lost my balance and fell on my butt. And this time, there was no layer of fresh powder snow to cushion the fall. It hurt. A lot. But I got up and continued on my way, telling myself to ski it off. Not that there was a choice about it, we were on the far end of the park.

I did take off my skis to go down a particularly steep bit since I hadn’t made it downhill at all without falling, and I didn’t want to risk my tailbone again. Especially after Ryan flew into the trees in a most spectacular way there. When we got to the end of the trail however, I found I was not able to bend over to take off my skis. Not good. 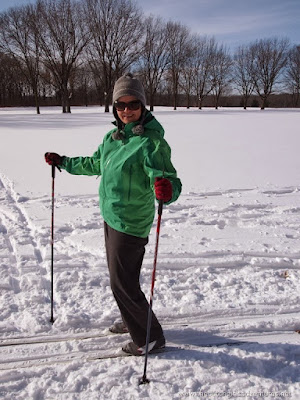 And so, after dropping Lola off at school Monday morning, I continued on to St. Francis to ascertain whether or not my tailbone was broken. It wasn’t, merely severely bruised. The pain should go away in a day or ten. I can’t take any good drugs for the pain since they cause constipation and that is the last thing you want in my situation. Ibuprofen it is then.
Bummer. At least I am not a broke ass, just butt hurt.