2. Transfer plants to sunny patch in the summer. Fight the slugs and watch the deer eat the leaves. 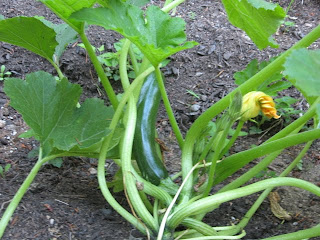 3. Harvest the two zucchinis that made it at the end of summer when it is starting to feel like fall. Show them off.

4. Heat two tablespoons of olive oil in a pot with a thick bottom.

5. Chop two onions and throw them in the pot, slowly cooking them to a golden brown color over low heat.

6. Meanwhile, wash and dice the zucchinis and add them to the pot.

7. Add one pint of vegetable broth (the zucchinis do not need to be completely covered).

8. Gently boil for about ten minutes until the zucchinis are done.

9. Take the pot off the burner and puree the soup.

11. Season with salt and pepper to taste.

12. Serve to vegetable lovers and haters alike and revel in their compliments.

Email ThisBlogThis!Share to TwitterShare to FacebookShare to Pinterest
Labels: Recipe

Why settle for one window when you can have three?

This time I assisted with the heavy lifting. It was a little scary because the windows really do weigh quite a bit and I was afraid they would topple over. With me on the outside and Ryan on the inside there was no way I would have been able to stop them from falling backwards. But they didn't and all is well. 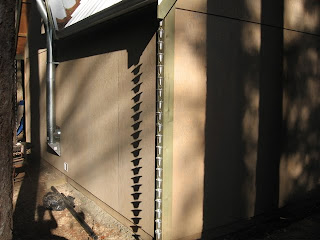 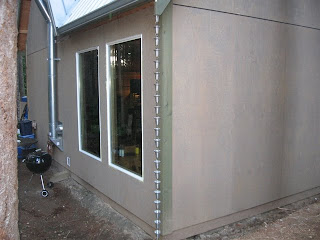 Email ThisBlogThis!Share to TwitterShare to FacebookShare to Pinterest
Labels: Barn

My 9th grade English teacher taught me English grammar does not allow starting a sentence with the word 'so'. Use it as an adverb, an adjective, a conjunction, but NOT as an opening. And if you mean 'therefore', use that word instead. I blatantly disregard these rules. But every time I do, I think of him. Every single time.

I really liked Larry Robinson. He was a great teacher. Not only did he provide useful skills like knowledge of correct grammar and spelling, he cared about his students. Very much. He had a good sense of humor. He gave us interesting assignments and I learned about resumes for the first time in my life.

He was a little vain, though, which we thought was funny. He was short which he compensated by wearing high heels (we're not talking Prince here, it wasn't that bad; Mr. Robinson was taller and his heels were lower). He had curly hair that he brushed out, creating a very interesting hairstyle, a semi-afro with a bit of a comb-over. It was the early Eighties, so (see?) he was able to get away with that.

He was young and energetic, and very involved with his students. Sometimes more than they cared for. When he caught wind of the fact my parents' marriage was in trouble, he wanted to talk to me about that. I wished to remain in denial and tried to avoid him, so (I know...) he made me stay after school. Being a teenager, I was very annoyed by it then, but I appreciate it now.

When Muzzey Jr High School closed its doors for good at the end of the school year, and I moved back to Holland, he moved on to Lexington High School where he became a student counselor. He eventually became principal of Andover High School until his death, ten years ago today. He was only in his forties. Much too young.

So, Mr. Robinson, of all the teachers I have ever had, you were the best one by far. I have wonderful memories of my 9th grade year and you are partly responsible for that. I promise to teach my daughter the proper use of the word 'so' and other English grammar rules. I am also trying to teach her another language, so bear with me. Fortunately my mother-in-law is an English teacher too, and I am sure she'll be happy to help out.

I truly wish Lola will some day have a teacher like you!
Posted by The Dutch Girl 3 comments:

Email ThisBlogThis!Share to TwitterShare to FacebookShare to Pinterest
Labels: Teachers

Lola has caught on to the fact that in order to shop, you need money. The other day I gave her some coins to put in her purse, where they miraculously transformed into a one and a five dollar bill. (So that's where our money goes...)

Last night she decided she wanted her money on her, and put it into her pants pockets. And then forgot all about it.

This morning when she got up, she went straight for her purse, only to find it empty. "Where is my money?", she demanded to know. Ryan started to laugh.

"That is NOT funny, papa!", she replied.

Welcome to the big world, little girl.
Posted by The Dutch Girl No comments: