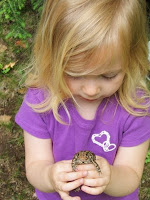 Last summer Lola was very much in love with slugs. Since there not too many of those around up here in the Northwoods, she has moved her affections onto frogs. She has a big white bucket with an orange lid that she uses to house the frogs she finds. It has slits in the bottom, allowing for air to circulate through. Still, we have to remind Lola every time not to put the bucket in the full sun, and to let the frogs go home to their families after a few hours.
It always breaks her heart, having to say goodbye to her most recent capture, but she understands. She wouldn't want to be stuck in a bucket without her mommy all day either. So she picks them up gently and sets them free. "I love you," she yells after them, "now hop on home." 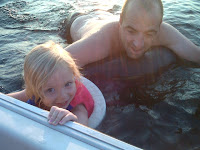 The wonderful thing about living on a lake is being able to jump in the water whenever you feel like it, weather and time permitting. And the past two evenings after dinner, we felt like it.

The water level of Lake Lucerne has dropped approximately five feet due to the drought, and my parents-in-law haven't been able to put the dock in behind the house for two years. The water is too far out, and too shallow for the boat. Fortunately the boat landing is less than a mile up the road. It takes us about twenty minutes to hook the trailer up to the truck, drive to the water, and load the boat into the water. And then we're off. 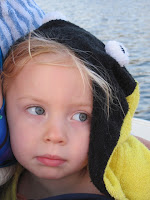 Lola loves being in the water. She wears a bathing suit with built in flotation thingies and bobs around in an inner tube. On Sunday evening though, she told me to take off the inner tube, tie on the water ski belt, and set her back into the water. I did, a little hesitantly. But she floated, and really well too. Without the restriction of an inner tube tied to the boat, she immediately paddled off, chatting and singing all the way.

Summer evenings on the water are absolutely delightful. If it weren't for the mosquitoes, I told Ryan last night, I would sit outside all night long. Lola's bedtime has been pushed back a little but how can we not make the most of this season? We have a long cold winter ahead of us to catch up on sleep.

Ahead Of The Game

Last Thursday I had the day off. That in itself is nothing new or unusual. However, on this particular Thursday I found myself without a husband or a child. I could do whatever I wanted and no-one was there to distract me. Absolute bliss!

And what did I do with all this time to myself? I got crafty. Christmas crafty, to be precise. I had been walking around with an idea for Christmas ornaments since last November, but had neither the time nor the necessary supplies before Thursday. The last component had just arrived in the mail, and taking advantage of my freedom, I decided to got for it. A tad early, but who cares? I briefly considered playing Christmas music but that would have been taking it too far. Besides, this wasn't about getting in the Christmas spirit, but about enjoying the creativity.

And enjoy it, I did. I made twenty little Christmas gifts with chandelier crystals, vintage images, a little glue, and some silver leaf. The how-to can be found at Dutch Girl Originals. They have been put away now, and won't be out for another five months. Never before have I been this organized. And I doubt I ever will be again. 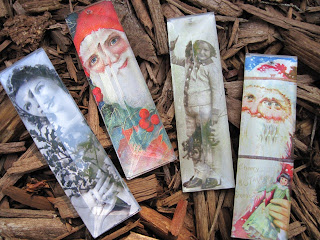 Email ThisBlogThis!Share to TwitterShare to FacebookShare to Pinterest
Labels: Lola

We lost. The Dutch were unable to defeat Spain in the World Cup final. The third time was not the charm in this case. It is painful to write it, but there you have it. And that's all I am going to say on the subject because I'd rather not talk about it.

Speaking of talking, Lola has developed a stutter. It started about six months ago. When we first noticed it, we attributed it to the language explosion going on in her head. We did a little reading on the subject and found out stuttering is not that unusual at this age. It is called normal disfluency and should go away by itself after approximately six months.

But it didn't. And instead of getting better, it got worse. To a point where it would take her up to thirty seconds to get a word out, resulting in Lola saying: "I can't say that word" and moving on to something else. We felt it was time to consult a professional. We saw her pediatrician last week who agreed there was cause to see a speech therapist, which we did this morning. He sat on the floor with Lola, playing games and counting her words. He needed at least one hundred words to make a proper assessment. Miss Chatty Kathy, who never stops talking, did not take long to get there. 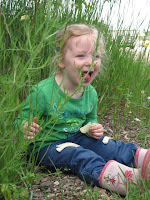 As it turns out, her language skills are exceptional for her age. She has an awesome vocabulary, makes fairly complicated sentences, and can pronounce sounds she should not yet be able to. The stutter, he told us, was nothing to be concerned about. She shows no signs of a genuine stutter problem, and the repetitions will go away in three to six months. G-g-good.

So we will continue to wait patiently for the words to come out, and will not interrupt or tell her to slow down, or start over. No need for speech therapy. That will surely disappoint Lola because she had a blast at the doctor's office. They have the coolest toys!

While I miss my family and friends, and a few things like working part time with full benefits, twenty two vacation days, sixteen weeks of paid maternity leave, high quality and affordable health insurance for all, etc., I am never homesick for Holland.
But today, I wish I was there to join in on the temporary orange insanity. Go Holland!

Update: The Boys in Orange won!!! We will be playing the final on Sunday for the first time in 32 years. I wonder if I can book a plane ticket still...

Email ThisBlogThis!Share to TwitterShare to FacebookShare to Pinterest
Labels: Holland

With the Fourth of July rapidly approaching, the amount of stars and stripes I see is steadily increasing. Almost every blog and magazine I read features the American flag in some way, shape, or form. For me, this is a little foreign. The Dutch are not too big on waving the flag. Sure, during national holidays and world cups, there is quite a bit of red, white, and blue in addition to the orange, but for the most part, you'll find the Dutch flag in a piece of cheese.

Americans are very different in this respect. Displaying the flag is the most visible sign of patriotism. And of that, there is quite a bit. It starts early on in schools with the daily Pledge of Allegiance to the Flag of the United States of America. The Dutch are not patriots, we don't display any pride in our heritage or country, a few zealots notwithstanding. We do not stand united. In fact, we are more divided than ever. It makes me very sad.

Where I come from, the saying goes "Just act normal, that's crazy enough." All this patriotism is a bit over the top for me. I have a hard time dressing Lola in an American flag dress, to be honest. Fortunately the dress we received is way too big, so this year I can get by without it. But I do like that on days like the Fourth, the whole country celebrates together, and the emphasis is on American, whether you're Native American, African American, Asian American, Italian American, Irish American, or Dutch American.

I know we are still a long way from universal peace, love, and understanding, in my new country as well as my old. But while the use of the different varieties of Americans may be considered politically correct, it also creates a sense of unity, attainable for every immigrant. The Dutch could learn a thing or two here.

Happy Fourth of July! Have a wonderful weekend, everyone.

When I passed on Barbie, Ken, and Skipper to Lola about a year ago, she was mainly interested in the dolls, not so much the clothes. If they were wearing clothes, she would make me take them off. And these barbies came with a ton of clothes, the vast majority handmade by my mother, my grandmother, and myself. There are some very fancy dresses in Barbie's collection, some with hand embroidered beads and sequins, all made from leftover material my mother used to make her own dresses.

Now that Lola is a little older and starting to develop strong opinions on what to wear, she wants her barbies to be nicely dressed too. Dressing a barbie is not that easy, and is often more than Lola can handle. I find myself frequently putting clothes on Barbie and taking them off again for her. I had forgotten how much of a pain that is. The pointy fingers get stuck in the sweaters, the shoes keep popping off, and fabric does not slide well over the dolls' legs.

Which is why, when Lola decided to take Barbie, Ken, and Skipper for a swim, I insisted they'd go skinny dipping. Dressing them when they're dry is hard enough, a wet barbie was something I was not prepared to deal with. Lola was fine with that. We brought out the red plastic party tub, took off their clothes, and in they went.

The party tub is a remnant of our non-running water days, of Life In The Barn. We used it for dishes and occasionally as Lola's bath tub or pool, depending on the weather. I was the garage the other day, looking at it and could not imagine my big girl once fit in that tub. It is so small. But she did.

And apparently still does... 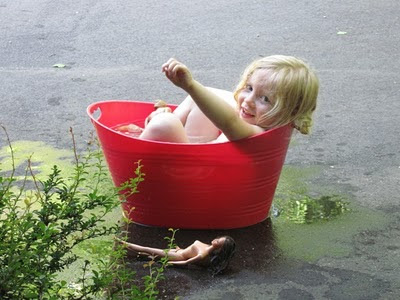