The Hunt Is On

Hunting season is approaching rapidly in Wisconsin. Gun hunting that is, bow hunting season is long underway. I joined my husband, father-in-law, and brother-in-law in the woods for the first time in 2011. From sunrise on Saturday morning until sunset on Sunday evening, I would sit in a tiny deer blind with my gun and a little heater, fighting off boredom, trying to stay warm. Some years it was easier than others. But despite diligently going out every year, I have yet to see a buck, let alone shoot one. 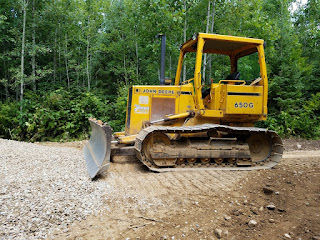 This means the question whether or not I can actually shoot a deer has remained unanswered. We hunted in Forest County, where the bucks are few and far between. We saw plenty of does the last couple of years, but nothing with horns. One year I saw a little buck with spikes at dawn, but not worth shooting, even if I could have gotten off a shot. 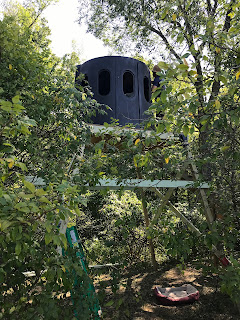 The buckless hunting frustrated my husband to no end. So last year he embarked on a search for better hunting grounds. Armed with a spreadsheet filled with DNR data, he located the Walhalla of Wisconsin deer hunting land: Buffalo County, where the bucks are plentiful and the racks worthy of mounting. The eighty acres and cabin in Forest County were sold, and the search for new land began. 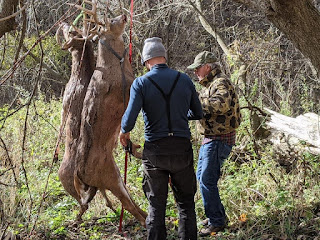 We found a beautiful forty acres tucked in between Durand and Mondovi, and spent the summer creating a spot for the future cabin, a driveway, and hunting stands for everyone. Mine is the last one to be built. I have a platform but will be spending my ten-year-sitting-in-the-woods-with-a-gun anniversary in a tent. And it looks like this year might actually be THE year. Bow hunting season was off to a good start as you can see.