"Mother!" (She calls me 'mother' these days. I don't like it but I have decided to pick my battles.)

"Mother. This is a serious question. What if I'm a musketeer and I have two horses. How do I get to town?"

"That is easy," I tell her. "You ride on one horse and you tether the other one to the horse you're riding on.

"I don't want to be a musketeer anymore," she answers me. "It's too hard. What if I cut myself with my sword?"

"That is why you practice. Most things are hard at the beginning. Do you think being an artist, a farmer, and a biologist (her other chosen professions) is easy?"

"My friends will laugh at me. I'll be the silliest musketeer ever!"

I set her on my lap, my silly musketeer with the serious concerns, and we snuggle for awhile. I tell her she has time to think about it. All the time in the world.

Email ThisBlogThis!Share to TwitterShare to FacebookShare to Pinterest
Labels: Growing Up, Lola 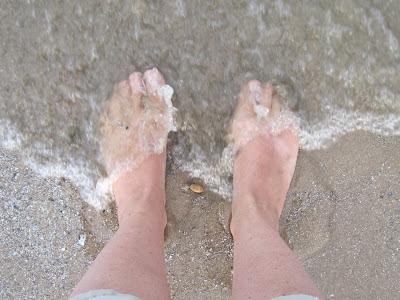 Lola and I made a summer bucket list at the start of her summer vacation. I went over it the other day and we're looking pretty good. More than half the things we wanted to do, we actually did.

There was fun in the backyard with water. Check.

There was father and daughter fishing. Check.

The father also taught the daughter how to fly a kite. Check.

A sleepover at Grandma and Grandpa. Check.

We went to a pick-your-own fruit farm. Check.

Unfortunately the pick-your-own raspberries are only available in the fall. So we went to the zoo instead. Check.

We went camping this weekend up in the UP. Check.

We finally made it to the Pulaski Polka Days. Check.

We are going to the county fair next week. It's right here in town so there's really no excuse to miss it. We are seriously considering entering a craft, by the way. Our vegetables, while tasty and prolific, are not quite 'fair ready.' Check.

Not on the bucket list but nonetheless accomplished this summer: going to the circus, riding on an elephant, feeding a giraffe, catching a bullfrog, riding a bike, and learning to sew.

So what's left? Hog wrestling, a trip to the farmer's market in Green Bay, a pie festival hosted by Lola, and learning new campfire songs. By the campfire of course. I'd say we are having an excellent summer, if a little hot at times. How is your summer going?

Adventures In The Squash Patch

On Tuesday's to-do-list was weeding and mulching around the zucchini plants. They are located next to the blueberry plants which are consequently barely visible. Next year I'll plant the zucchini on the other side of that particular spot in the garden. The zucchini is doing very well. We started some indoors but the biggest plants are the ones that sprouted from the seeds I simply pushed down in the dirt this spring.

The pumpkins had a rougher start but are now slowly taking over the patch at the back of the garage. Only one plant made it from the indoors to the outdoors but again, dropping a few seeds in the dirt gave the results we were looking for. Sort of anyway. So far I have spotted only one jack-o-lantern in the making.

The finickiest plant turned out to be the watermelon. Not one of our indoor starters made it and only one of the seeds I planted, sprouted. But we do have a little watermelon growing behind the blueberries. I hope it ripens before summer ends. We'll have to wait and see. 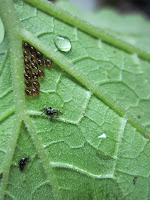 A gardener must remain vigilant at all times however. While I was harvesting zucchinis I spotted squash bugs on my plants. I immediately ran inside to grab a spray bottle of Neem oil, a biodegradable leaf polisher and bug killer. Wonderful stuff! Because I was stalking my zucchini plants, anxiously waiting to rob them of their fruit, I caught the bugs at their nymph stage, which enabled me to ward off a full fledged infestation. I cut off the leaves with eggs and sprayed the remaining leaves with Neem oil. I think we're going to be okay.

Squash bugs are not the only animals to look out for, though. When Lola and I were looking at the baby watermelon, I spotted a snake in my patch. I nearly jumped over the corn fence. It wasn't very long, not even two feet, but it was a fatty. I don't know much about snakes but I could tell by the markings on its back that it was not a garter snake.

I don't like animals that slither. But at least with garter snakes I know they are harmless. Nevertheless, they freak me out when I stumble upon one. This snake looked like a rattle snake with a bright colored head. It lay there, very still, with its tail in the blueberry plant and its head under the mulberry tree.

Lola and I went back inside to see if we could identify it with the help of Google. Sure enough, we discovered it was a Western Fox Snake. Looks like a cross between a rattlesnake and a copperhead, but without the venom. It's actually very useful since it rids your garden of rodents. With Sandman having decided he is too old for that sh*t, we could use some help in that department. The chipmunks are out of control, to be honest.

We went back outside to take the snake's picture. Knowing we were not in imminent danger, we quickly made our way back to the squash patch. Too late. The snake had vanished. I did not like that. Much as I fear the creature, I would prefer to be able to see it and know where it is. Our grass needs to be mowed (hint, hint...) and it's difficult to see if there's anything hiding in the grass.

Needless to say, weeding and mulching around the zucchinis is still on the to-do list.