The original idea for the cabins was to fix them both up at the same time, but that turned out to not be financially viable. Instead we focused on the house that was in desperate need of a new roof and siding. For two reasons, really: 1) without a new roof, it would not last much longer, and 2) it had a working wood stove. We contacted a local contractor by the name of Walt to quote us a metal roof and siding, as well as new windows and a driveway. 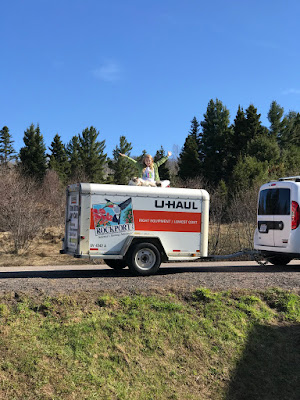 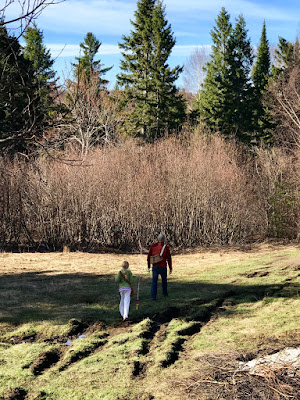 Unfortunately the price of steel increased substantially between the initial quote and our order. So much in fact, that we decided to change course altogether. We still contracted out the roof because we’re afraid of heights, but are seriously considering doing the rest ourselves. One room at a time, we will remove the old lath and plaster, and put in insulation and tongue and groove planking. New windows, new flooring if needed, and finally new siding, starting with the front because that needs it most. 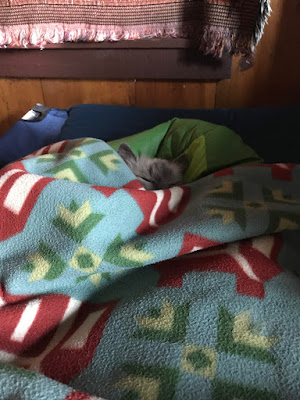 We butted heads a little on the insulation. Ryan was a big supporter of spray foam insulation, while I felt using fiberglass or foam sheets would allow us to scour CraigsList and save some money. While I agree that spray foam is the superior product, it requires the whole house to be done at once. I was still making my case for fiberglass when I removed the old insulation in the kitchen, encountering a snake nest with live occupants. Needless to say, I instantly saw the light. Spray foam insulation it is. 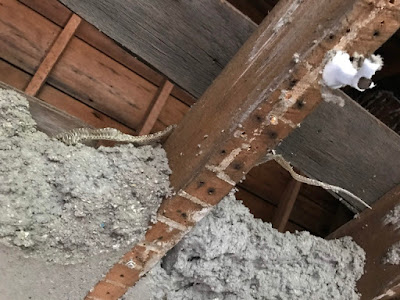 After the initial cleaning in April, we returned in May to find the snow gone, in its place a lot of previously buried treasures. We discovered a decrepit golf cart, piles and piles of lumber, an unusually large number of utensils, and tons of beer cans and bottles. In short, more to clean up. Cleaning would be the recurring theme for the Summer of 2018. We cleaned the yard, the upstairs, and even the outhouse. We then moved the outhouse further back on the property because it’s just not that great a thing to have in your outdoor sitting area. 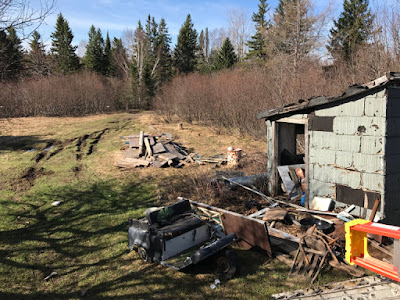 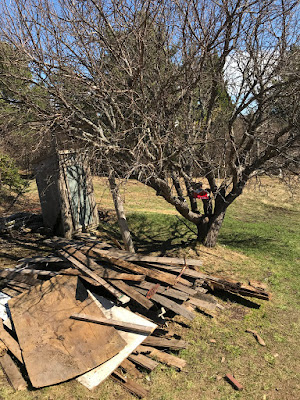 We had help. One of Ryan’s high school friends came up to give us a hand, bringing his daughter to keep Lola company while he and Ryan broke up the bunk beds and chucked a dozen mattresses, old chairs, and other random furniture out the window. 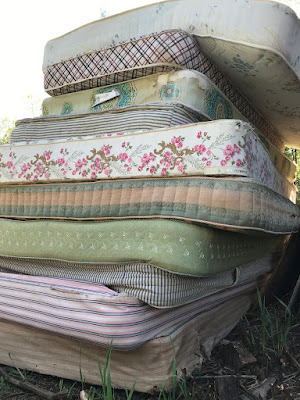 Progress is slow, but it is being made. And every now and then we’re getting a glimpse of what it will look like when it’s done. 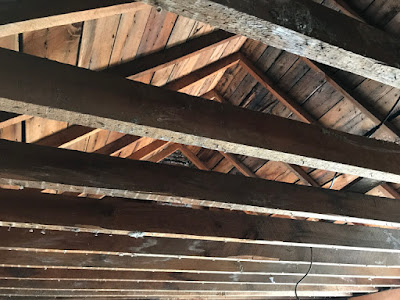 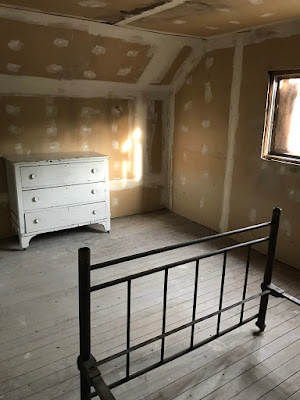 Email ThisBlogThis!Share to TwitterShare to FacebookShare to Pinterest
Labels: Barn, DIY, UP

I don’t know about you but I prefer my blog posts with photos, especially when reporting on renovation projects. Yet it is those same photos that trip me up. Because pictures need to be selected, downloaded, edited, and when taken with an iPhone, converted to a different file format. And before you know it, a year has passed, and no progress reporting has been done. That doesn’t mean we didn’t do anything, though. On the contrary. 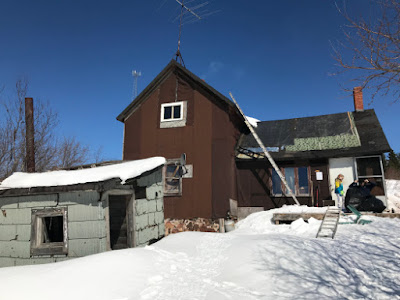 We worked hard on the UP properties last year. Starting in April, we traveled north just about every other weekend, and cleaned our butts off. Moving from Milwaukee to Wausau the year before meant cutting our trip in half, time-wise, bringing it to approximately four hours.


During the month of April, the world was still covered in several feet of snow, making it impossible to drive onto the property. We would park on the road and slip and slide down to houses, with cleaning supplies and wood for the wood burner. 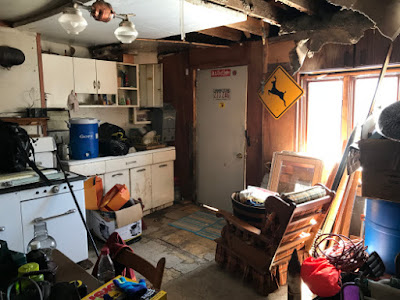 The previous owner was not able to clean out the cabins for health reasons, and he ended up donating almost everything in them to us. While that was a very generous offer, the cabins were mainly used as a guys’ hunting camp and the decor wasn’t quite what we had in mind, with the exception of the log table/bench you see below. It was put there by the miners some 100 years ago and it, and its mate because there are two, is not going anywhere. They are too heavy to carry out so we renovate around them. 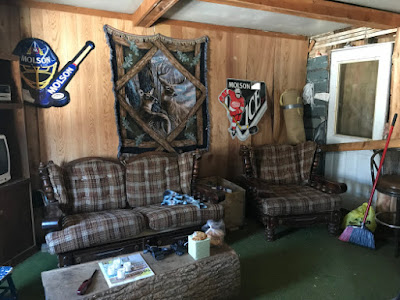 We started by cleaning up the bar area. All of the windows need replacing but for now a blanket covers up the cracks. After that we tackled the rest of the downstairs area. 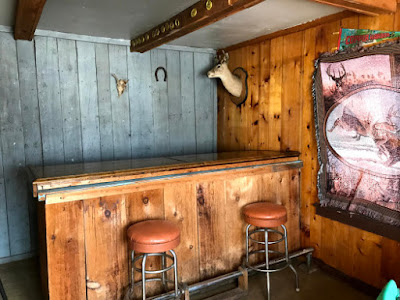 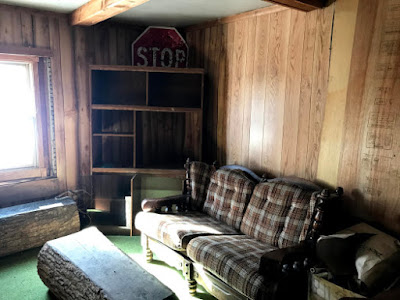 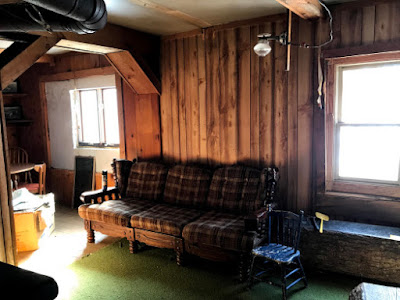 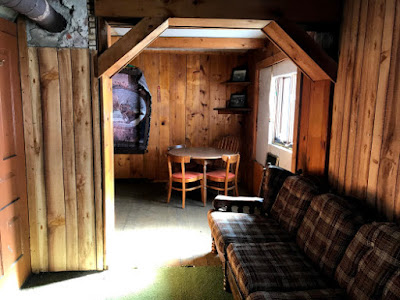 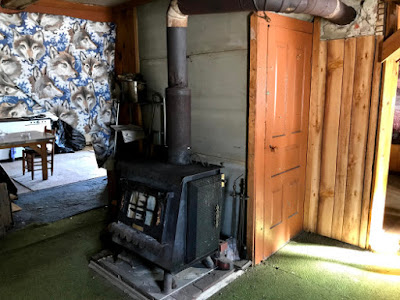 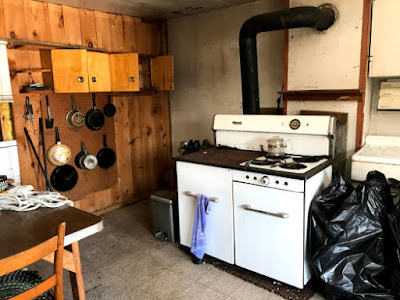 It wasn’t all work and no play, though. All this snow needs to be appreciated while it’s still there. 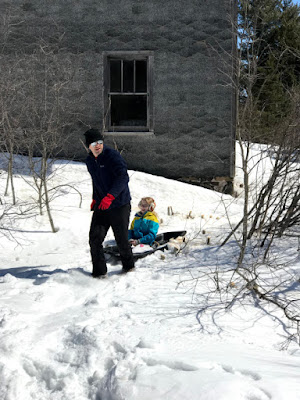 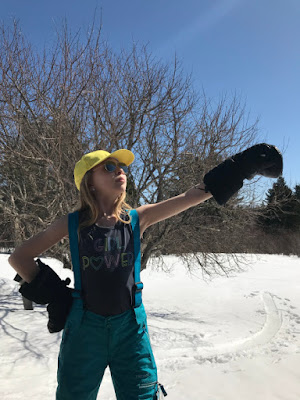 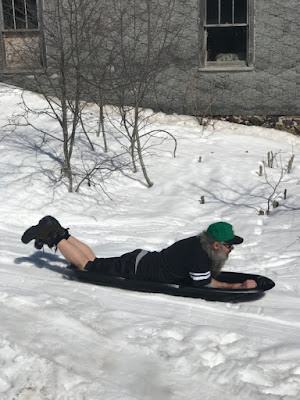