Twice now have I turned on the television and found myself transported back to Holland. The first time was a little over a year ago and a nasty surprise. Picture this: you're working out at the gym, pushing your own weight with your legs. You look up at the row of television-sets suspended from the ceiling, when all of sudden, without warning, Peter R. de Vries appears on screen! Dutch self-proclaimed crime solver and reporter. Very annoying man. He claimed he had solved Natalee Holloway's murder and was advertising his show during which The Truth would be revealed. Right.

Yesterday morning was a much more pleasant experience. Nijntje! Or Miffy, as she is known here. Lola loves Nijntje, we read her books frequently. She didn't feel the same about the cartoon though. After the initial happy recognition, she quickly became bored with the bunny and moved on. She doesn't care much for watching television. She prefers playing with her nipples. 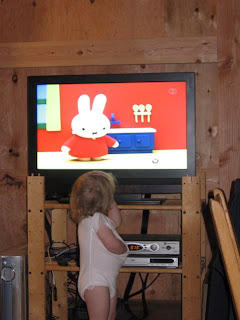