Tiger Woods's public apology really has people talking around these parts. Some think he's sincere, some don't. They're very passionate about the subject. Personally, I don't care. It is none of my business. It is nobody's business in fact, but Tiger's and his wife. They should be left alone to work out their issues. Or not. It's their choice, and I don't need to hear or read about it.

But this morning, when I checked my email and found the CNN AM Fix in my inbox, I noticed the Dutch have beaten out Tiger Woods for the Top Story. Ha! Just barely, though, and only because the US has an interest in the matter. Unlike Tiger, the Dutch cabinet has decided not to work out its issues. I wonder if the citizens of Holland get a public apology, too? 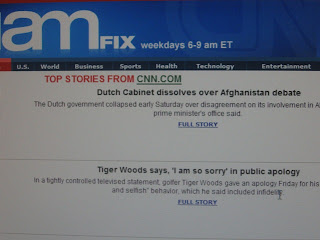 Email ThisBlogThis!Share to TwitterShare to FacebookShare to Pinterest
Labels: Holland