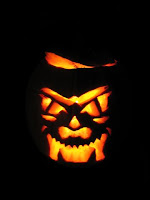 I was in Wisconsin the past few days, visiting with my in-laws, and interviewing for the position of marketing manager with a casino in the Northwoods. My interview went well, after a bit of a rough start. Rather than opening with the standard "So Johanna, tell us a little bit about yourself..." the first question posed to me was: "Please tell us about one of our promotions and what you would do to improve it?" It felt like I was taking a test I hadn't studied for. "Eh..."

The next question was also a good one: "Tell us about your past experience in gaming." I have none. Things improved after that, fortunately, and I left with a good feeling. I had made a portfolio of marketing materials I have made for my previous employers and it was very well received. I am absolutely convinced they like me as a person, but more importantly, they must like as a marketeer as well. I really hope so, I want to move to Wisconsin. I want to live within driving distance of family and friends, and make a fresh start. It will be a major transition with some very serious consequences, but I am so ready to take that step. 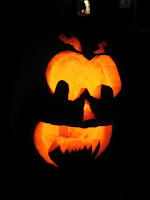 On Friday, the day of my birthday, my parents-in-law and I drove south again. We took the scenic route along the river, through the woods and the rolling hills of America's Dairyland. I have this fantasy of one day living in an old farmhouse on a couple of acres in the middle of nowhere. My dream was almost tangible as we were making our way down state. At one point we saw a young couple parked by the side of the road. They had removed the back seats from their car and simply sat there, looking out over the river.

"Even if something is left undone, everyone must take time to sit still and watch the leaves turn." - Elizabeth Lawrence

I celebrated my birthday and Halloween with my brother and sister-in-law. The afternoon was spent carving pumpkins. It was fun watching my nieces work on their creations. E. meticulously carving an intricate design she had downloaded off the internet. M. confidently drawing a face on her pumpkin in one go and carving it out. And L. insisting on scooping out all the goop and seeds herself. 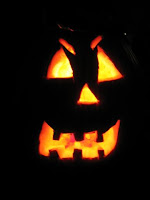 They live in a neighborhood with plenty of children. Every year at Halloween three streets are blocked off to all traffic and one street is converted into a Haunted Street with a haunted house and more spookiness. Huddled around a fire pit in the driveway we watched hundreds of creatures great and small walk by. At one point one of the neighbors remarked he had already handed out 1700 pieces of candy. And he needed more! Since this was Wisconsin, plenty of parents accompanying their kids sported a beer. Something you would NOT see in Washington. A Starbucks coffee maybe, but alcohol? Never!

As I was watching the little ones trot by, I really missed Ryan and Lola. Her first official trick or treating, and I wasn't there. That is the only thing I did not like about my trip: having to celebrate my birthday and Halloween without them. Next year it will be different! I think I'll go as a witch...
Posted by The Dutch Girl