It was sunny when I left Wabeno yesterday afternoon, but it started drizzling a few miles from home. Not too long after that, the gentle rain turned to hard rain. And then the wind picked up. At about 5:30 PM the power went out. I was standing by the kitchen windows, looking at the developing storm over the lake. It was really blowing out there. The trees bent in ninety degree angles and I thought to myself: "This is the type of weather where they tell you to step away from the windows..."

The next thing I heard was my father-in-law telling us to move into the basement. Now. We picked up a bunch of flashlights and a battery powered radio and went downstairs, briefly stopping to coax a freaked out cat back into the house. When we got there, hail started coming down. At first just little pellets, but they quickly turned into golf balls. It lasted for maybe ten minutes and then just like that, the hail stopped and the wind died. It was still raining, but the storm had passed. 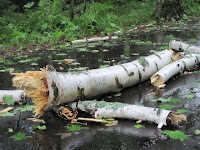 My first tornado warning ended as abruptly as it began and the storm did not do too much damage. Some broken branches, a few hours without power, and an evacuated casino, but that was it.
It is awe inspiring though, how quickly weather can turn from something we love to complain about to something that is to be taken very seriously. The human race likes to consider itself Masters of the Universe with sometimes horrifying results, such as the present oil disaster (spill doesn't quite cover it in my book) in the Gulf. It is a good thing Mother Nature sets us straight every now and again. We need it.

Email ThisBlogThis!Share to TwitterShare to FacebookShare to Pinterest
Labels: Weather