Lola woke me up in the middle of the night crying for her mommy. I found her in the bathroom, sitting on the toilet. My happiness about her waking up to go potty (it's still hit and miss with lots of laundry around here) quickly subsided when I felt her warm body and heard her cough. She was burning with fever and obviously sick. I tucked her back in and snuggled for a little bit. Just before I went back to my own bed, I told her she would not be going to school the next day. She perked up. "Are we going to make party hats?" 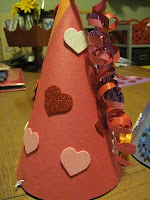 She has been begging me to make party hats for days now. I have no idea why or where this burning desire came from. But what else is there to do when you're spending an unexpected day at home? Party hats it is. We taped some construction paper sheets together and cut out a circle large enough for a hat. Lola went to town embellishing the hat with glitter hearts, left over from Valentine's Day. Of course one was not enough, we had to make five.

While Lola was clearly feeling better by the minute, my health rapidly deteriorated. When it was time for her nap, I decided to take one too, rather than enjoying some free time. She slept until three, I woke up around dinner time. Ryan had come home in the meantime and spent the afternoon entertaining his daughter and looking after his wife.

I am feeling much better now and tomorrow will be business as usual. I will go to work as planned and Lola will go back to school. But at least we got the party hat project out of the way.