I did not know this particular competition existed before I read that interesting bit of news. I do know people like to compete for the strangest titles and awards. Even in our family.

The other day when we were out and about looking for a place to live, we wandered around on a property and emerged covered in ticks. After the tick count was complete, Ryan came out the winner. I must have pulled fifteen ticks off him that afternoon, and at least ten off Lola. Strangely enough not a single one was found on me.

When it comes to bear sightings, we are all in agreement that Lola has seen more black bears these last two years than anyone else. 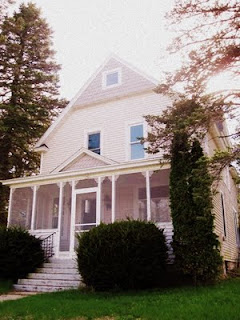 But where moving is concerned, I am the absolute winner. When we move into this cute little Victorian home later this month, it will be the twenty fifth time in my life that I have moved house. TWENTY FIVE MOVES. That's a little more than once every other year.

For the next five years, I am not going anywhere. Wild horses cannot drag me.