Ryan and I celebrated our sixth wedding anniversary last month. The original plan was to camping in Door County together while Lola stayed with her grandparents. But then we learned about the Kermis in Little Chute and we decided to go admire their genuine, imported from Holland and rebuilt in Little Chute windmill instead. And we brought our Fairy Godmother along. 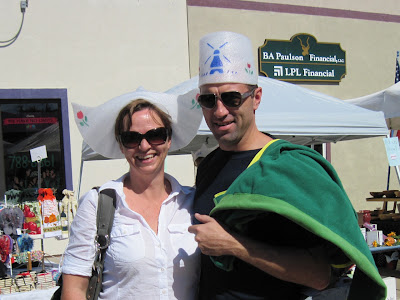 Our Fairy Godmother is my aunt. Some twenty years ago she, my uncle, and my cousin moved to the US and ended up in Wisconsin. My cousin and Ryan went to school together and when T. got married, I flew in for the wedding and my aunt seized the opportunity to hook her niece up with a nice looking usher. That was in July. We were married in September of the same year.

The Kermis was much smaller than we thought it would be, but the Dutch pancakes we had for breakfast were the real thing, and it was strangely comforting to see a working Dutch windmill against an American skyline. Kermis in Dutch means carnival but there were no rides to go on. We visited the craft fair and took silly pictures in our foam Dutch hats. Next year we'll go camping in Door County.