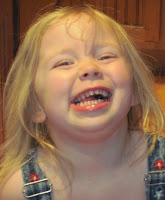 It is Lola's first joke and she cannot get enough of telling it. She thinks it's hilarious. So do I. It is not so much the joke itself though, it is the delivery that does it for me. It is a good thing we are related and share a silly sense of humor, because I have a feeling this is the first of many, many Knock, knock jokes...