I started this post on New Year's Day, hence the title. I could have sworn there was a picture of an eagle here before. You see, as I was sipping my coffee outside on that crisp January 1 morning, there was an eagle soaring overhead. I watched that eagle for a good ten minutes, marveling at its beautiful and graceful movements. What a wonderful sight to start the new year with.

I went back inside to share it with you, only to find the router had crashed, bringing my resolution of posting twice a week to a screeching halt. The problem has long since been fixed but life happened and blogging did not. To bring you up to speed on our adventures, here are the cliff notes.

* The casino's Marketing Director left and I am now pulling double duty. It's been hectic to put it mildly.

* I have taken up belly dancing classes. Every Thursday evening, I shake my pelvis for an hour with four other middle-aged women. We look silly, we feel silly, but our pelvises love it.

* Lola has entered the Princess Phase. In addition to a tiny Cinderella doll with rubber dresses (that I have to dress and undress), she is now the proud owner of pink and silver princess sneakers that light up when she walks. While we were making our way to the cashier after picking them out, she told every single person in the store she had new shoes.

* Ryan and I went on a date this week. Nothing spectacular, just drinks and dinner. We are going to do this every month. I just hope our next dates go better than this one did. We must be out of practice. Come to think of it, we never dated. We pretty much met and got married. We obviously need to do it more often. Practice makes perfect.

* The whole family received ice skates from Santa Claus. We tied them under last week and went skating in the park. It was after dark and we had the rink to ourselves. We didn't skate very long but we had fun. It was Lola's very first time on skates. In two weeks, we are taking her skiing. 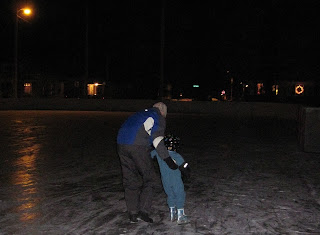 * While we were skating in circles, there were two cars parked outside the rink, one with its door wide open. We looked around but didn't see or hear anyone. Very strange. As we were getting ready to leave, a woman came out of one car and got into the other one with the open door. I have a sneaking suspicion we stumbled onto Rhinelander's red light district. Ryan isn't sure.

* There are four business trips in my immediate future. I am flying to Palm Springs at the end of this month, to the Wisconsin Dells in March, and Phoenix and Las Vegas in April. I could get used to this.

* And last, but certainly not least, I have one more trip planned. On March 17, Lola and I are flying to Holland for eight days. Finally I will be able to introduce my daughter to her aunt and her cousins. We cannot wait. It has been four and a half years since I have seen most of my family and friends. Ryan is not coming, he cannot take that much time off work yet.

You're all caught up again. As for the present, I am tending to a sick child. She has a cold, a sore throat, and a bark like cough. Poor girl. I hope she feels better in the morning. We are going to make cupcakes together.

I wish you all a (very belated) Happy New Year!