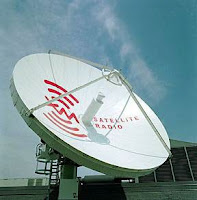 It wasn't too long ago I publicly sang the praise of satellite radio. How happy I was with the commercial free stations, the freedom to listen to Bruce Springsteen all day long, or songs from the seventies, or Christmas music round the clock. So happy in fact, we decided to purchase a year long subscription before our trial was even over.
And so our troubles began.
Ryan wrote XM Radio a check for $173.27 which was cashed on October first. We thought we were good to go. We were wrong. The payment, as it turns out, was never applied to my account and in December we received our first bill for the same amount plus $2.10 for 'invoice costs' as it was put.
I called XM Radio's Listener Care department. A cute name but not a very realistic one because neither listen nor care are verbs one associates with this service after trying to deal with it. I have spent hours on the phone with them, trying to work things out with people who have not mastered the English language very well and could not care less about this listener. When you ask for a supervisor, you're disconnected. On my third try my call was routed to a girl that seemed to grasp my problem and she supplied me with a fax number for the billing department. I faxed over my proof of payment and hoped for the best.
Two weeks later I received a reply: a reminder invoice with another $2.10 tacked on to cover the cost of the invoice. They must have some fancy printers there. I called Listener Care again, only to find out the fax number I was given was not an XM Radio fax number. Really? Where did I send a copy of my bank statement to? She had no idea. She gave me a different fax number, a genuine XM Radio number she assured me. The number didn't work. I tried for two days. It rang but was never picked up.
And so I called the Listener Care department for a third time and lo and behold, I was transferred to a supervisor without being hung up on. I was given a third fax number. I felt really good about that number because it came from a supervisor this time, someone in charge. "The number you are trying to reach is not in service." Phone calls were obviously getting me nowhere and I decided to write a letter, a very polite one even. I enclosed copies of everything and again, hoped for the best.
Two days ago I received my response. My service was scheduled for deactivation if I didn't pay immediately. Sometime today they made good on their word and cut me off. I have run out of options. It is impossible to resolve anything with a company that refuses to communicate. When I searched online for an alternative way of contacting XM Radio, I stumbled upon Consumer Affairs' website with 62 pages of complaints about this company. Most experiences, from what I have read, are similar to mine.
I am ready to throw in the towel and write my $173.27 off as a bad investment. But I learned from Consumer Affairs that XM Radio is not done with me. I have more bills to look forward to, charging me for the six weeks of service between the end of my free trial and the day I was cut off. Plus $2.10 for the cost of the invoices no doubt. Followed by collection calls at all hours of the day, because of course I am not going to pay them. We'll see. In the meantime I am back to listening to regular radio. Not commercial free, but at least it's hassle free.