Wisconsin men are tough. They will not let a little snow or arctic freeze get in the way of hunting, ice fishing, snowmobiling, skiing, sledding, or playing football in short sleeves. My husband can currently be found in Michigan's Upper Peninsula, skiing with this brother. Last year around this time, he took off all his clothes and jumped in a frozen Lake Lucerne. Not me, I took pictures, fully clothed. 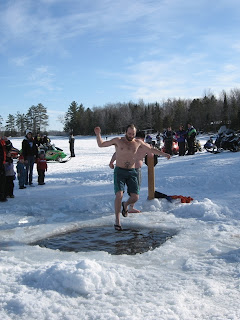 Holland also has a long tradition of polar plunges. They are called New Year's Dives. They have become quite popular is the last decade. Hundreds, if not thousands of tough Dutch guys and girls run into the North Sea on or around January first. But when the temperature drops too far below zero degrees Celsius, those dives are canceled for fear of injuries and hypothermia.

Not in Wisconsin. This year's Polar Jump took place yesterday. And the temperature may have been sub zero, I am sure there were more than enough tough guys, and the occasional tough girl, who were willing to take the plunge.