The Dutch Girl went deer hunting recently. For the first time in her life. Being a blogger, she brought along a journal and took notes while waiting for her buck. Don't tell her father-in-law. He would not approve. 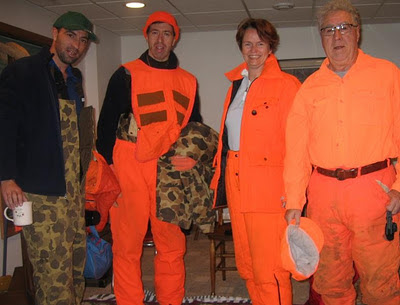 Despite the fact that the woods look a lot different in the dark than they do during the day, I was able to locate my stand without a hitch. The light on my blaze orange hat hit the reflecting markers we had left the day before perfectly. Getting lost in the dark was one of my two big concerns. The other was wounding a deer instead of killing it. I didn't have to worry about either as it turned out.

My resolve to go hardcore without turning on the heater lasted about an hour and a half. With my toes nice and toasty, I must say hunting wasn't half bad. Of course, my stand was the cabana among the deer stands. A view to all sides, a shelf to rest my gun on, ample space for a heater, and a portable potty. All that was missing was the beverage cart. And a buck.

Just before sun up on opening day, a shot was fired close by. I thought it was perhaps my brother-in-law who was hunting about 300 yards away. He thought it was me. Ryan and his dad were hunting fifteen minutes northeast of us. Ryan, who generously gave up his spot to me, had the added excitement of sitting on top of a hibernating bear. Sometime in the previous two weeks, a bear dug out a den and went to sleep about twenty feet from his stand.

There was an animal raising a ruckus somewhere in the trees in front of me. It turned out to a blue jay. I am fairly certain he was telling on me. Aside from that blue jay, the only wildlife I saw for hours was a squirrel and a few chickadees. And then, out of nowhere and without a sound, a deer. Less than fifty feet away. My heart skipped a beat. Alas, it was a doe. We looked at each other for a minute or two, before she continued on her way. It was the highlight of my day.