Many summers ago, I visited the small town of Patara in Turkey. Lonely Planet describes it as “scruffy,” a title that suits the town very well. There are few tourists to be found there, the people are friendly, the beach is stunning, and the archeological dig site is quiet and fascinating. It is also the birth place of Saint Nicholas.

As an adult Nicholas became the bishop of nearby Myra in Lycia, where he died on December 6, 346 AD. He was known for his kindness and secret gift giving, such as placing coins in the shoes of people that left them out for him. His acts of generosity inspired the myth of Sinterklaas as he is known to the Dutch, or Santa Claus as we know him here in the Untied States.

Dutch tradition has Sinterklaas scaling rooftops on his horse on December 5th, Saint Nicholas Eve, leaving gifts behind in children’s shoes set out by the fireplace. Children leave drawings in their shoes for Sinterklaas, and carrots, straw and water for his horse. His helpers are Black Piets, black because of the chimney soot, merry gentlemen much like Santa Claus’s elves. 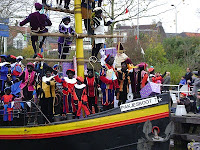 Over the years, Sinterklaas has become a snowbird, moving to warmer Spain where he spends most of his days. Around mid November he arrives by boat, an event nationally televised. Rain or shine, thousands of young and old believers flock to the harbor to welcome him to Holland. Whenever I stumbled upon Sinterklaas’s arrival in later years, I instantly became a believer again. I am to this day.

When Dutch and English immigrants arrived in America, they brought Sinterklaas and Father Christmas with them, and eventually the two merged into one. Clement Clarke Moore’s poem “A Visit from St. Nicholas” (‘Twas the night before Christmas…) was the first to introduce Santa’s sleigh with reindeer and the man himself as jolly and slightly chubby, an image immortalized by the Coca Cola Company in later years.

Tonight is Sinterklaas Eve, and my friends and family in Holland are all celebrating and exchanging gifts. I read on Green Girl in Wisconsin’s blog that Sinterklaas is celebrated in certain areas of Wisconsin, due to the large numbers of Dutch living there. As much as I like the thought, it will not be the case in Rhinelander tonight. We're sticking to one gift giver for now, peace on earth, and goodwill towards men.

Email ThisBlogThis!Share to TwitterShare to FacebookShare to Pinterest
Labels: Holidays