Trespassers Will Be Shot

Back when Scotland was just a stone throw away, I used to do quite a bit of hiking in the high and lowlands. Scottish law demands that owners of private land allow hikers the right of way. A lovely piece of legislature, opening up the entire Scottish countryside to all who wish to enjoy it. Hikers in turn are expected to keep up their end by staying on the path, picking up after themselves, and not disturbing nature and live stock. This practice is not known in the UP, Michigan's Upper Peninsula. The Yoopers do not allow you the right of way, they shoot you instead.

We left Rhinelander early Saturday morning for an impromptu visit to the Keweenaw Peninsula in the UP, just over a three hour drive from the Northwoods. It is still winter up there with several feet of snow. Ryan has traveled there a few times this season, to go skiing with his brother at Mount Bohemia. He wanted to show us this beautiful place on Lake Superior, look at some land, and putz around on snow shoes. And I was hoping to see a moose.

We picked Mount Houghton as our snow shoeing destination. We purchased a topographical map of the area, programmed the coordinates into Penelope - our GPS, and scouted the best place to park Big Blue and commence our hike. About a hundred yards into our ascent we stumbled upon a house. It was clear it was occupied for the weekend but no one was there when we approached. We quickly walked around the house and continued on our way. Ryan was very uncomfortable with this, but I did not see what the big deal was. 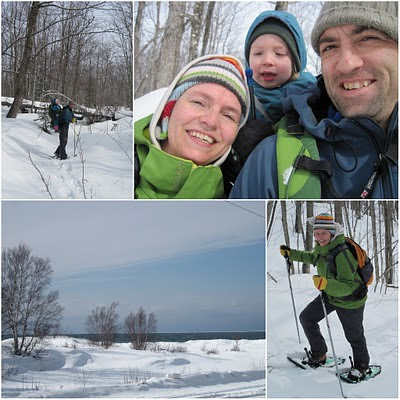 On our way down, we noticed a car parked by the house and decided not to barge through the yard but instead give it a wide berth. While we did not speak a word, it is impossible to be stealthy on snow shoes. Snow may fall quietly and muffle all sounds, it makes an amazing amount of noise when you walk on it. Whoever was staying at the house obviously noticed us creeping about. The next thing we heard was a semi-automatic rifle being emptied into the air.

We ran as fast as we could, which wasn't fast at all. The gun-toting Yooper got in his car and followed us. When he caught up to us, he stopped. We were in the woods, about thirty feet to his right. We ducked, feeling awfully silly because in no way were we reducing our visibility by crouching down. He did not get out of his car but drove on and stopped next to Big Blue, parked at the end of the road.

I had left a note on the dashboard with what we were doing, where we were going, and at what time we left, in case something happened to us. We stood at the top of the hill watching the man circle our car. He must have read the note, seen Lola's car seat, and decided we were not a threat. He got back in his car and drove off. We quickly made our way down, took off our gear, and left.

We were more shocked than scared, to tell you the truth. Other than this incident, which reads more frightening than it was, our weekend was wonderful. The countryside was lovely, the snow abundant, and the weather glorious. We even got a little sun burnt. But sadly, no moose.