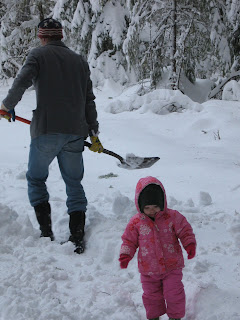 It was not exactly love at first sight for Ryan and Lola. This father - daughter relationship needed a little time to develop. Both the experts and amateurs assure us this is quite normal. More often than not, squirming and screaming babies do not render men weak in the knees. Now Ryan and I will never agree on just how much Lola cried (not that much) but we do share the opinion that she was - and is - loud. We never had to use a baby monitor. But Lola getting older and the two of them hanging out a lot this summer has greatly improved their relationship. That, and they both like to wrestle.

Interestingly enough, she listens much better to Ryan than to me. She can whine and fuss when we are alone but when she's with Ryan, she is much more pleasant. She'll be playing and having fun until I enter the room - then it's 'Dee, dee, dee!' 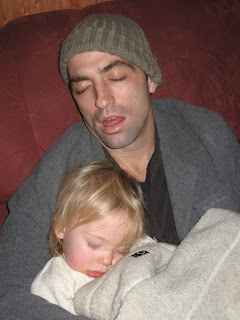 (she is saying the Dutch word for 'that' but spelled properly it looks like 'die' and I don't want to give the impression she's evil), pointing at whatever it is she wants. And she just won't stop until either Ryan says something or I raise my voice.

Ryan is not so secretively rather proud of this. I am a little confused. Why is this? It's like she saves it all for me. Is it a compliment in disguise, do I baby her too much, is it because I usually feed her? She's always pointing at food. Do I not feed her enough? She's growing well and still at the top of the charts according to her pediatrician.

Carla tells me Dylan is the same. He'll be happy as a clam until his mother comes in, then the fussing starts. This does not comfort me. Lola is not yet two, Dylan is four years old. I am hoping this is a phase that will pass. But two and a half years seems a bit long for a phase.

Fortunately there are experts that write books about this sort of thing to help reduce the constant second-guessing that comes with motherhood. I am currently reading The Happiest Toddler on the Block. I like it so far and its predecessor The Happiest Baby on the Block made sense to me. And of course I have Ryan. Between the two of us we will tackle this. In his case, literally.
Posted by The Dutch Girl