So, what have I been up to the past twenty months or so? Two things mainly; adjusting to being a wife, a mother, and a US resident, and looking for a job. I think I am doing okay at adjusting, but finding a job? Not so much. I cannot get a foot in the door in this town! I must have sent out at least one hundred (100!) job applications, the vast majority for jobs I am actually qualified for, and I have had four (4!) job interviews. Sad, isn't it?

And what's really annoying, is that for the most part, companies don't bother to say "Thanks, but no thanks." I hardly ever hear anything back. Local government is the one exception. They have consistently turned me down, but at least were kind enough to tell me almost every time.

Of course, the economic times are not in my favor. The Governor has called for a hiring-freeze for the State of Washington and the City of Olympia does not appear to be hiring either. Only essential positions are being filled. And like in The Netherlands, communications and marketing positions are not considered essential when money is tight. I should have become a teacher or a nurse.

Instead I have diversified into beading. The beading business is booming in this country and I am happy to be a part of it. I work at Bello Modo, an online store for beads and jewelry-making supplies. We work out of my boss Pam's house – actually, the business has grown out of her basement and is now located in its own separate building on the property – on the other side of Olympia. And while I continue to look for a job that matches my resume a little better, I am enjoying this one in the meantime. Being the organized counterweight for my creative colleagues, I get to reorganize things a little bit, both in the store and on the web. Meanwhile Pam and Shelly, my friend and co-worker, are off to Hawaii to do a show. 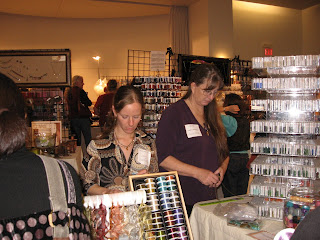 I have only done local shows so far because of Lola. Who spends the time that I am working with a wonderful woman named Carla and a four year old named Dylan. 'Dina', she calls him. Sounds like 'dinner'. She loves him. He likes her too, if only she would keep her hands off of his trains!
Posted by The Dutch Girl