I speak Dutch with Lola, everyone else English. As a result Lola speaks Denglish. She says "ja" in Dutch but "no" in English. She says "bye-bye" in English but "hallo" in Dutch. Actually it's "hawwo." She has some difficulty pronouncing the L. She calls herself "Wowa." S’s are also pretty problematic. At least when they are located at the end of a word. She can say "I see..." but not "poes". I thought "Sandman" would be a bit ambitious so I call the cat "poes" around her. Whenever she sees him, it's "Ha poef." His cue to take off. She loves him so, he still doesn’t feel the same. Alas.

Lola repeats everything I say these days. In the morning we drink a "kopje koffie" (a cup of coffee) - well, I do, she drinks milk. She can't have coffee until she's four. But she can say it. (I don't know where the four comes from; you'll have to ask my mom about that, it’s her rule.)

We have funny conversations with each other. I told her during a diaper change "You stink," to which she replied "I know." Ryan feels I give her more credit on her language skills than she deserves. He will often ask her silly questions just to emphasize that her answering the question correctly does not mean she actually understands it. He claims she says "Ja" to everything.

"Are you going to climb the Empire State Building?"
"Ja."

"Are you going to party with your friends?"
"Ja."

My girl cracks me up.

When she drops something or makes a mess, it’s "Oh Lola!" In a painfully high pitch. When she finds something it's "A-ha!", "Boing..." when she falls. "All done," she'll declare when she's had enough of whatever it is she's doing or eating. Occasionally, when I point out there's a big pile of food on the table rather than on her plate, she'll act all surprised. Where did that come from? We are currently working on "I love you."

For a long time I was convinced Lola's first words would be "Bless you" because of the amount of sneezing going on in our house. No. When she started talking, she said the usual first words for a child; da-da, ma-ma, aardbei (Dutch for strawberry). But this morning, when I sneezed, she said it. It may sound different than when I say it, but I heard it loud and clear. 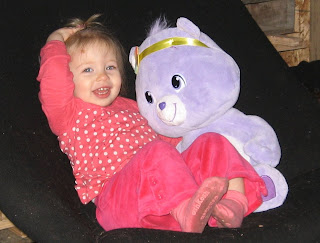