The Truth And Nothing But...

When I embarked on my Olympic Adventure, I expected something different. I cannot tell you what exactly but certainly not the situation I currently find myself in. The thing is, we’re broke. Not a little broke, no, Broke with a capital B. I guess Ryan and I felt that after having survived the first year of our life together – with a whirlwind romance, an international wedding, immigration, and a baby – we needed a new challenge.

With me not being able to find a job, our financial situation was not great to begin with. Then Ryan was offered a wonderful job with Siemens Building Technologies and things finally seemed to be going our way, the operative word being ‘seemed’. In this country privacy is a hollow phrase and insurance companies rule the world. On his last day with Comcast while he was briefing his replacement, Ryan received a phone call from Siemens HR in Chicago, telling him there was a problem with his driving record and he was deemed unemployable. “You’ll understand we have to withdraw our offer. Have a nice day”. Seriously, that’s what they said.

As it turns out, two and a half years ago, Ryan was late paying a speeding ticket. They are very straightforward about that sort of thing here; you don’t pay your ticket, they suspend your driver’s license until you do. He has long since paid his ticket but not until three years have passed, is an insurance company willing to insure an employee with a suspended license on his record. Or so Siemens claims. The credit-scoring type points system they use for the hiring of new employees tells Siemens Ryan is unemployable and if the computer says so…

Do I sound bitter? Perhaps a little bit. Where I come from, driving records are not available to employers. Being four weeks late paying a ticket results in a fine, not unemployment. We pulled out everything we had trying to persuade Siemens to put people ahead of policy but to no avail. Policy is policy! And they were so happy to have him on board. We’re talking 10,000 dollar signing bonus, company car, the works.

So, one moment you’re trying to buy more property, the next moment you’re bending over backwards trying to keep the one you have. Since that glorious day in June we have made a few interesting decisions that so far are not really working out too well. Underestimating the difficulty he would encounter finding another job, Ryan pursued his dream. He built a barn in our backyard. He has put everything into it; blood, sweat, tears, and quite a bit of money. We wanted it as a guesthouse at first, or perhaps a rental, but we quickly decided we were going to live in it ourselves and rent out the house.

And that’s what we have been doing since December of last year. Unfortunately, we ran out of money before it was finished. We have no running water (unless you consider a garden hose running from the well running water), no plumbing (we highly recommend Cabela’s Luggable Loo), no downstairs windows (not installed anyway), no insulation, and no stairs. There are a few other things not yet ready but you get the picture, I’m sure. Basically, we’re camping with all our stuff. We try to laugh at ourselves and our situation and not give in to self pity too much. And most of the time we pull it off. 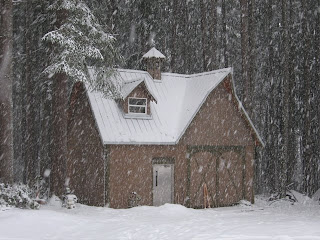 On a positive note: the chimney is fixed and the barn is warm and cozy again. Of course, when we moved back into the barn, the storm had knocked the power out. I kid you not. Life is an adventure indeed!
Posted by The Dutch Girl